Exporters have probably accepted already the Russian food embargo. Most likely the Ukrainian dairy products will not be supplied there (in Russia) soon. 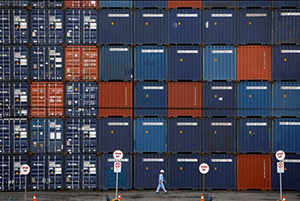 At the same time in January at the website of Federal Service for Veterinary and Phytosanitary Surveillance Rosselkhoznadzor the strange information appeared about permitted deliveries of dairy products to Russia from one plant, and introduction of strengthened control for another. And that at the time when import of Ukrainian products should be completely forbidden.

It was started to solve the problem of transit just recently. Of course, no one used “Silk Route”, offered by the government, as there was no desire to pay additional USD 200/t for logistic expenses.

There are already pioneers using the scheme of deliveries through Belarus. The process is more difficult, than it was registered in Russian law. It appears, the notorious system GLONASS does not work in Russia, and there are no promised seals. Now the Ukrainian exporters are compelled to employ a special escort which should accompany the cargo to the Kazakhstan border. Certainly, escorts are not cheap and nobody will pay them for several trucks. Therefore it is necessary to wait on the Belarus-Russia border, when the column (about 15 trucks) will be formed. Only then all go to Kazakhstan «under reliable protection». Certainly, it is necessary to pay for these security guards, about USD 300 for every truck. There are also other additional financial expenses, for many the distance is extended by about 20%, it costs money too. Nevertheless, now there is no better sales market, than Kazakhstan. So, Ukrainians will sell the dairy products there, despite such difficult way. But export will decrease all the same. It may be that not all cargoes, which were directed to Kazakhstan before, reached it. Henceforth such deliveries will be stopped.

Belarusians and Kazakhs, however, promised to simplify the transit. Kazakhs said obligatory escort across Russia can be cancelled. For this purpose they will submit to the Russian side the lists of the importers and contract volumes, which will guarantee arrival of the products to Kazakhstan.

Belarus closed schemes of import of Ukrainian cheese products, which successfully worked last year. It is big loss for Ukrainian exporters, after all, the deliveries already reached 3 000 t a month.

There was good news concerning trade with Uzbekistan. In particular on January 27 the Verkhovna Rada ratified the Protocol on the implementation of the Free Trade Area Agreement. This protocol was signed in 2013 and was not ratified. So, Uzbekistan will not impose duties on Ukrainian dairy products. They were high, therefore export to this country was problematic.

Situation with long-awaited export to the EU is still not clear. 10 enterprises allegedly obtained the permissions, but, it appears, the European customs has not got the duty-free quotas for Ukrainian products yet. It seems that allowing procedure (entering into databases, obtaining licenses etc.) will be long. It is possible to deliver out of quotas, but then duties are imposed, which are very high in the EU. They are by many times higher than in Ukraine. So, EU countries may establish the deliveries of dairy products to Ukraine much quicker, than our exporters will only partially enter the European market.