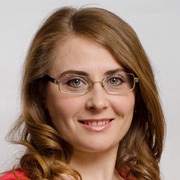 One of the features of the modern world agriculture development is the growth of concentration and specialization of the agri-food production. In dairy industry, this process is expressed primarily in reducing the number of dairy farms in the world and increasing the size of the average farm. Over the past 10 years, the number of dairy farms in the world decreased by 1 million – from 119 million in 2007 to 118 million in 2017. The average size of the farm has increased, from 2.8 to 3.1 cows respectively. At the same time, in the USA, the average farm size grew from 122 to 203 cows, in the EU – from 9.4 to 18.4, in Australia – from 214 to 283 cows.

Here is the example of the changes in the number of dairy farms and the average herd size in European countries (data IFCN Dairy Report 2017): 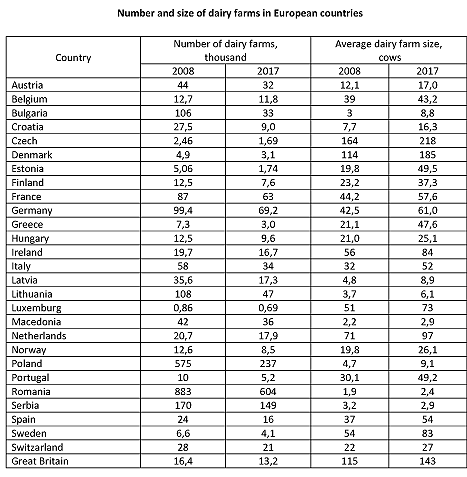 The process of concentration and specialization of production is also evident in the dairy industry of Ukraine. Over the past 10 years the average herd size in agricultural enterprises increased from 143 to 204 cows, the number of farms that kept cows decreased from 6043 to 2600. In 2017, 72% of raw milk were supplied to dairy processing enterprises just by this category of farms (dairy farms engaged in industrial milk production) and this figure increases every next year.

Analysis of various groups of agricultural enterprises engaged in milk production shows that of all dairy farms, 234 are those keeping 500 cows and more, and their production characteristics stand out. These farms keep 54% of the total number of cows of all agricultural enterprises. They produce 58% of milk produced by all industrial dairy farms. Unlike other farms, the group 500+ is characterized by the increase in the number of cows, the herd productivity in such farms is above average, they show high cow’s productivity and high efficiency: 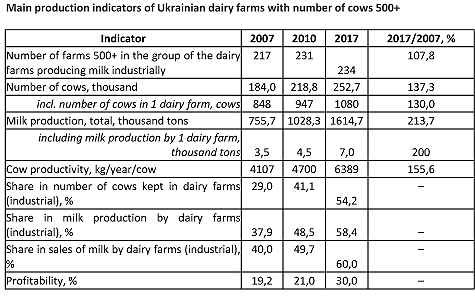 In 2017 the share of this group of farms in supply of milk for processing amounted to 40%. At the current rate of increase in production, in 2030 such farms (500+) will provide the volume of milk which all dairy farms supply to the processing enterprises now, that is, 2,700 thousand tons.

The leaders of large-scale dairy farms know that processing enterprises need high-quality raw milk, so, the sale of high-quality milk they produce is ensured. In addition, a market niche which has been occupied by private households producing milk is being vacated: some of the peasants curtail production due to objective circumstances, and some will have to leave the market due to the new requirements regulated by the Ukraine-EU Association Agreement regarding milk quality. This situation will contribute to invest more internal reserves by the dairy farms to increase the productivity of the existing livestock. This will also enhance the growth of both the number of large-scale farms and their concentration. This scenario is the most predictable and beneficial to all the market participants: milk producers, processors and the state.