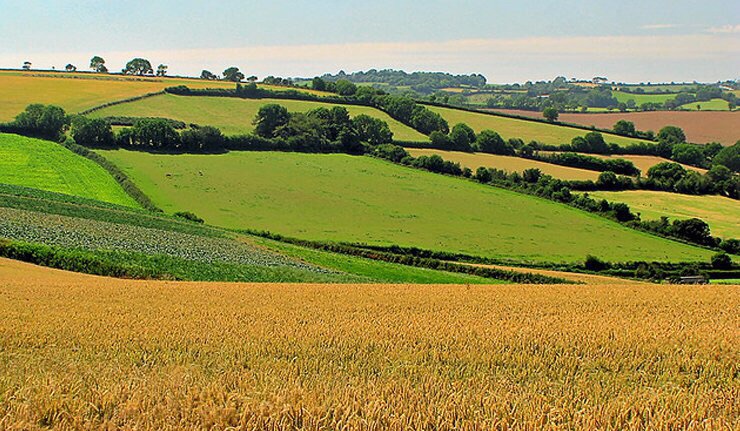 November 30 – December 14, 2018, the Kyiv International Institute of Sociology (KIIS) conducted its own all-Ukrainian public opinion poll on the right of the citizens to freely dispose of the land shares they own.

The 4-step stochastic sample of 2,034 respondents representative for the population of Ukraine aged 18+, living in 110 settlements of all the regions of Ukraine (except the Crimea) were interviewed by method of personal interview.

In Luhansk and Donetsk regions, the poll was conducted only on the territory controlled by Ukrainian authorities.

“The opinions of Ukrainian population regarding the issue of land purchase/sale are ambivalent. According to the joint study of KIIS, “Rating” and the Razumkov Center that was conducted in the second half of October 2018 (total number of respondents was 10,000), if the question was formulated as “If a referendum on the purchase/sale of agricultural land was held today, how would you vote?”, 72% would vote “against” and only 13% would vote “for”. That is, voting in a hypothetical referendum on the “purchase/sale of agricultural land” gives diametrically opposite results than the idea of a citizen’s personal right to sell his land/land share.

First of all, the public opinion on this issue has not been crystallized. Secondly, the opinions of the population are susceptible and sensitive to various manipulative statements, which cause high sensitivity to the formulation of the question in social surveys (and as a consequence, lead to the opposite results). Obviously, there is lack of reliable information on this issue, which would be trusted by ordinary citizens of the country and allow a stable public opinion to be formed.

In your opinion, should a citizen of Ukraine who owns land/land share have the right to freely dispose of it, including the right to sell it? 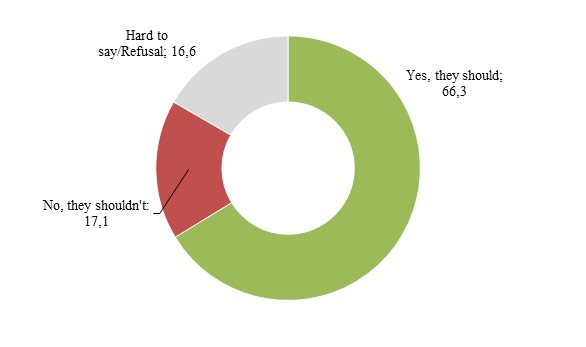 Below, in Table 1, the distribution of answers to the question is given in the context of individual socio-demographic segments.

In your opinion, should a citizen of Ukraine who owns land/land share have the right to freely dispose of it, including the right to sell it?
(% of all respondents of the corresponding socio-demographic layer) 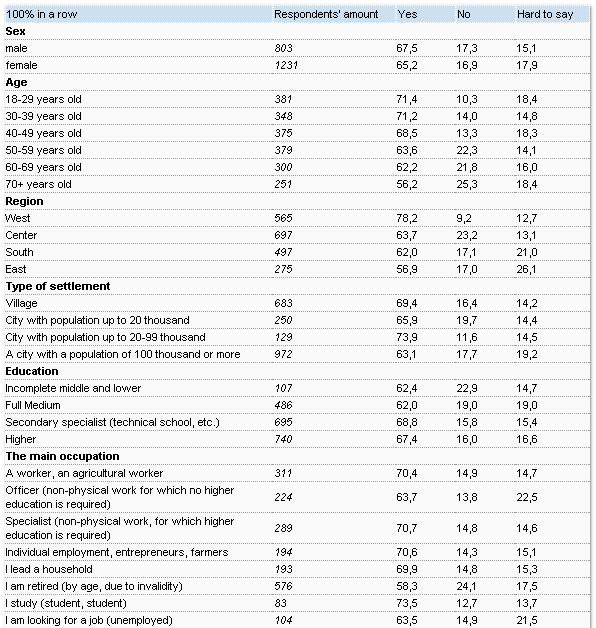 Annex 1. Formulation of the questions in the questionnaire
In your opinion, should a citizen of Ukraine who owns land/land share have the right to freely dispose of it, including the right to sell it? (% among all respondents)