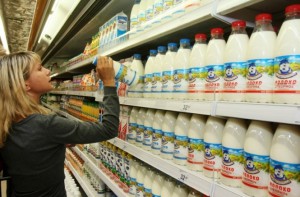 Making сhoice – where from to buy dairy products – depends on the consumer’s capabilities. First of all, he decides where close to his place he can buy them.

In Ukraine, depending on the type of locality, urban residents have the range of choice about like this: city market – dairy kiosk – an ordinary shop with milk department – a store – supermarket. In smaller cities, this chain is shorter and there are less types of retail outlets. And, apart from that, there is also a “sidewalk” trading with the options – “sold using the package boxas a stand”, “using a small folding table,” “on the way, close to transport junctions”, “from the car”.

Speaking about villagers, there are fewer options: they can either consume dairy of their own homemade produce, if they hold a cow, or they can buy it from the village shop, a local market or store. When the outlet – where to buy from– is defined then the factor of consumer’s preferences comes into effect. It filters out the available retail outlets. For example, if a consumer believes that homemade products sold on the city market are “natural and useful,” and industrially produced are all “chemistry”, then even if the supermarket is in front of his house, he will go for milk and dairy products to the market. Or buy from a car, which delivers homemade dairy just to his house’s yard by a person completely unknown to him and selling milk bottled in used Coca-Cola, mineral water or beer bottles.

The choice of dairy products of industrial production sold in stores, kiosks or supermarkets is wider. Added to those mentioned are soft and hard cheeses, yogurt, various types of milk and milk drinks with fillings, processed cheeses, desserts and many more. Products of large dairies are available from almost any shop, but in small towns the assortment includes also the dairy made by regional producers. In big cities, where consumers are considered to be richer, there on the shelves are also appearing the so-called “organic products” which now occupy more shelve space than before.

The purchasing capacity of the consumer, even in difficult times, has almost no influence on his choice of the retail outlet for buying dairy. Getting poorer, he just begins to buy milk not as often as before, buys less, and when it relates to industrially made dairy – choose products of cheaper brands and uses promotional sales. After all – he begins to make some dairy products himself.

The research conducted by TNS KANTAR in Ukrainian cities with population over 50 thousand people, including urban settlements, shows that in the eyes of Ukrainian consumer the price of milk on the market and in the store is almost the same (economically active respondents aged 30-40 years do not notice the price difference), and a certain percentage of consumers consider market sold dairy products cheaper (young people under 30 years of age or older generation).

In the past three years, according to KANTAR TNS, in 2016 the share of Ukrainian consumers who save on food reached 25%. More than a half of respondents say that they had to abandon the familiar brands of dairy products because now they cannot afford them. No wonder, because, despite the growth of income in local currency, hryvnya, in dollar equivalent it has drastically dropped: 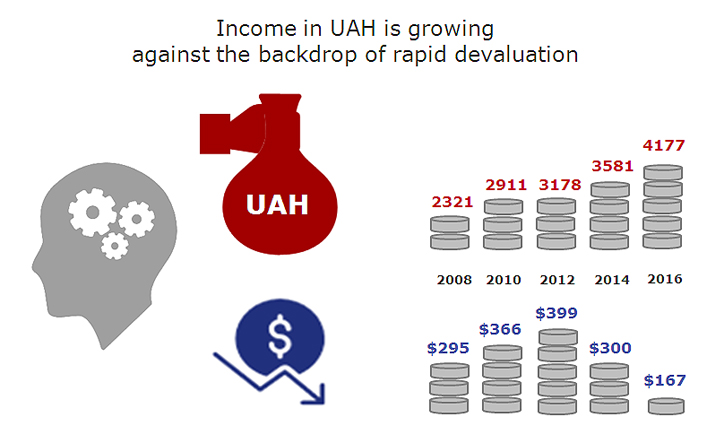 In the chain “dairy farmer – processing plant – trade – consumer” everything works not that simple. When looking on the dairy shelves and seeing the skyrocketing prices, consumer get shocked and curses dairies. Then he either begins to go to the store not that often or buys less and not what he is used to, or he switches to the city market dairy, which he believes is cheaper. The issue of product safety in this situation recedes into the background (if at all is interesting for the consumers). Although consumers are aware of the low safety of the products bought on the market, they still consider them more useful: 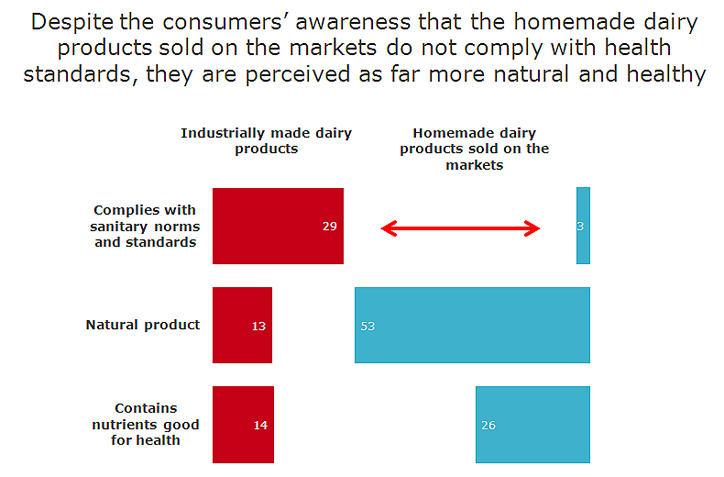 In this situation, how do dairy processing plants behave? They purchase raw milk at a price growing all the time and now some dairies pay as much as 10 UAH a liter. So, the dairies begin to buy less milk reducing the volume of production and start using technologies and ingredients that make their products cheaper. After all, dairy processors may allow to raise the price only up to a certain limit. They realize that any further raise will cause the next wave of decline in sales volume, because the consumer remains stubbornly poor.

According to Infagro, the villagers who has been traditionally supplying dairy products to the markets, will cut milk production. It is becoming less of the people in the villages who are ready for this hard work – keeping cows. The perspective of hard work for uncertain economic benefits is not appealing to young people.

On the one hand, it seems that this provides the dairy industry with the new opportunities for market expansion. On the other hand, the dairies will not get this market share for granted, they will have to fight for the vacant niche. In Ukraine, there began to appear processing plants, which are mainly created by milk producers. These small and medium dairy enterprises are aimed at production of cheese, whole milk products and some specific regional products to sell them in their local regions. Despite the hard times, there are getting more and more of such dairies, and it may happen that their products may become more attractive to consumers. Due to small parties, marketing slogans “from local farms’ milk” “tastes like homemade”, etc. their produce will be better percepted by consumers, the former “market dairy addicts” who used to take milk products bought on the market more “natural”, tastier and healthier. Let us not forget that it is more than 70% of them. And this loyalty did not cost a penny of advertising expenditures to those “babushkas” who sell dairy on the market.

So, in these circumstances there are several options for the dairies. First, they have to decide whether to consider the strategy of fighting for the market share under the increased competition, or direct the main efforts on production of commodities – milk powder, whey, butter, etc., and eventually leave the opportunity to indulge conservative Ukrainian consumers to arising small dairy businesses, who will definitely be trying to get their modest market share. These SMEs are really small, but their number is rising and after some time it will be impossible to ignore them.

There is another option – to actively compete for consumers, to convince them of the advantages of the industrially made dairy products and be prepared to spend a hefty money on educational programs and promotion. Our dairy processors are not used to big marketing expenses, because for Ukrainian consumer dairy products are a traditional must. Here again there are options – either to take efforts and educate the consumers, or rely on the assumption that a young generation will appear and they will not consider the homemade dairy bought from the market more “natural” than that made by industrial dairies. Then dairies may simply wait. They will have to wait for a very long time. Seems weird, but children of those who are now in their 40s, keep the same conservative tastes as their grannies, not their parents. They are also inclined to think that homemade dairy from the market is more “natural” than industrially made produce. Seems that considering the situation in dairy industry, just this last option – “to wait” – will be the one our dairies will have to keep.

INFAGRO. Graphs from the presentation of Julia Volokh, KANTAR TNS, at the IX National DAIRY BUSINESS-2016 conference in Kyiv, 24 November, 2016.