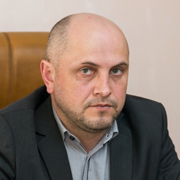 DN: Vasyl, you are the owner of the INFAGRO analytical agency, right?
VV.: Yes, I am.
DN: How did the idea of establishing INFAGRO appear?