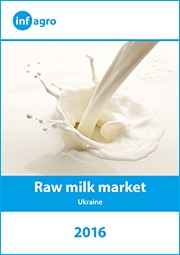 The research findings demonstrate that milk production in the country is in crisis. Because of the geopolitical confrontation with Russia, general economic decline and changes in taxation system in 2014-2016, the situation in Ukrainian dairy sector has significantly deteriorated. And even if the world market of dairy products returns to balance in the near future, Ukrainian dairy producers will have hard times over the next 1-2 years.

At the same time, in 2016 the rate of decline in milk production  slowed down.

Over the past eight years the number of dairy processing plants decreased threefold. In 2015, the dairies bought 4.1 million tonnes of milk. Only a quarter of purchased milk is of European quality.

According to the study, the participants of the dairy market do not trust official statistics on milk production. In the situation when there are five different schemes of milk procurement and some other appear, the validity of figures on milk purchases becomes questionable. Analysis of the situation proposed in the report contributes to better understanding of the real state of affairs on the market.