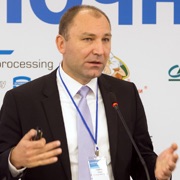 INFAGRO: In your opinion, how a professional association of dairy processors should act to be effective in providing technical support to dairies and promote Ukrainian dairy products to foreign markets?

The most successful association of manufacturers of various products is usually organized so as to guarantee transparent and competitive business environment to its members and the industry as a whole. It also should do that in the transparent way. The industry and the members of the association should control its activity. The association should be open to accepting new members. Association’s Legal Department should work on protection of each of its members and help to improve legislation to allow the industry develop harmoniously.

The Association is a very convenient mechanism for the state, because it can quickly formulate a view of the entire industry on a problem.

Association of individual enterprises can save huge amounts of money because together its members could get significantly cheaper access to good quality analytical information. For Ukrainian dairy association it would be good to promote consumption of quality milk products by introducing a common system of quality control and a sign to be placed on the product labels of only those manufacturers whose products meet the high quality requirements. Even at the current low level of income, it could contribute to the prompt increase of consumption of milk of Ukrainian production by 10%.

An educational campaign tailored for Ukrainian consumers could be extremely relevant. Most of Ukrainians believe that as soon as milk was pasteurized, it becomes “pure chemistry”, but the milk bought at the market from an unknown “babushka” is very safe and healthy. Through the farmers’ markets (“bazars”) there is sold the equivalent of 1.8 million tons of milk! This is the raw milk that bypasses dairies, and this milk competes very successful with the products made at the dairies! So, de facto, population takes away from the dairies a half of all the revenues and more than a half of potential profits only because the population is a much more successful “marketer” than our professional manufacturers. This is about losses of billions hryvnia worth to fight for.

Of course, for one company it is difficult to run such an educational campaign, but the industry association of dairies which have huge volume of trade could well afford it. After all, every kopiyka invested in the education campaign will generate 10 kopiyka of extra revenue, maybe more – it all depends on the skills of the people hired for this job.

Of course, the association may also engage technological support, development of new products and so on. However, this depends on whether such services are of interest to members of the association.

INFAGRO: How do you assess the recent active claims of Ukrainian Association of retail suppliers regarding the selective testing of dairy products (including butter)? What do you think, why almost all the dairies (except Yagotynsky) accused by the Association of supplying substandard products, in fact, did not respond to the allegations? We mean they did not respond adequately – using media, etc.

I believe that such statements are a crime that should be investigated by relevant authorities. It is easy to assess the reputational damage. People should bear responsibility for what they say. And, by the way, this is the case when just association can promptly respond so that truthful information is instantly spread through all media, and a lawsuit is filed immediately! Why some enterprises do not respond? It is better to ask them about this. Maybe they do not really believe in our judicial system.